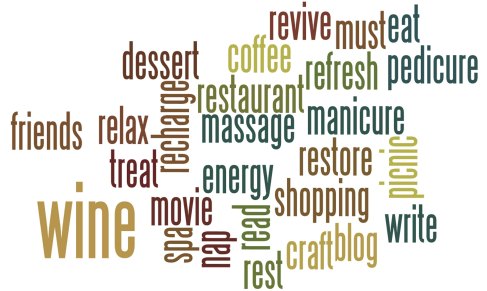 So, the kids have been out of school since December 20 and we’ve had some serious fun these past couple of weeks…a mellow Christmas and New Year meant that we were feeling pretty rejuvenated; got some good projects done around the house, but also made time for play dates in the park, dinner with extended family and even afternoon naps (remember those?) – however being a mom to a nearly 6 and nearly 2 year old who decided during this break that he was no longer going to nap made for pretty active days…quiet time was sort of a joke!

I started work on the 2nd, but my daughter doesn’t start school till the 7th, so she came along with me wherever I went. My son reluctantly went back to daycare.

Today started as a usual day – however by 9.30 am it was pretty evident to me that I needed a break from everyone including my kids! I really needed a day away from people in general. I was on people overload! I wanted time to think, day dream, sit, enjoy coffee while it was still hot and oh yes…get my nails done without worrying that my daughter’s “nail polish train” at the salon wasn’t going to result in nail polish art splashed all over the floor. So I dropped off the little boy to daycare, and dropped off the little girl to her grandmother! (thanks Ma!!). I had one appointment which blissfully got canceled and then I had this glorious, sunny, warm Southern California day all to myself.

I had a lot of work to do, but I knew that I would be a lot more productive if I just took an hour or so to do nothing – so I took myself up to my gorgeous barely used sun room – left my phone where I couldn’t hear it vibrate or buzz and just sat on my barely used (cat occupied) couch. I went on a stroll through the boardwalk of my mind, allowing the soft breeze caress my face, listening to the sound of the ocean crash along the shore of my mind’s eye. I tried to recollect the last time I had done this, and I couldn’t. Thoughts of work, family, kids and commitments also popped into my head – I gently acknowledged them, and nudged them back out.

A while later, I was so rejuvenated from my mental beach walk that I powered through an intense project and then decided that my nails could use some attention. It turns out that the last time I paid them any attention was over 3 months ago! YIKES!

By the time I picked up my kids, I was so excited to see them – as though I hadn’t seen them for days! We had a really fun evening playing together.

So do your family a favor – tell them you need a break from them and go do something that is purely, strictly, exclusively, solely for YOU! They’ll appreciate it!